Documentation for each component is linked below.

Vegetable Assassin is a web-based game where players slice virtual vegetables with an internet-connected foam sword. The sword communicates orientation information to the game session using a persistent WebSocket connection to a server, the game is generated and rendered using a 3D client JavaScript library, and game statistics are saved into a server database.

The game draws heavy inspiration from the game Fruit Ninja by Halfbrick Studios. Vegetable Assassin is played by launching the game website from a web browser, which displays various fruit vegetables as they are thrown into the air. Players are tasked with cutting all of them with a foam sword that is tracked by an onboard micro-controller and inertial measurement unit (IMU). But beware! Some vegetables are not vegetables at all, but fruits trying to disguise themselves! Players gain points for cutting vegetables, get a strike if they miss a vegetable, and lose if they accidentally cut a fruit.

We first describe the layout of a system during a single-player Vegetable Assassin game. There are four components of the system: the sword, the browser, the WebSocket server (hereafter named the WS server), and the statistics server. Each of these components is described in greater detail in later sections. While the WS server and statistics server are disjoint applications, they do not necessarily have to be run on different hardware. In fact, the public implementation of these two services run on port 80 and port 8080, respectively, on a single server.

Communications within Vegetable Assassin follow a hub-and-spoke system layout. The WS server is responsible for serving as the hub, and the sword and browser are both connected to the same channel on the server using a persistent WebSocket connection. Each channel is identified by a session ID, where all messages sent to the channel by a client are emitted to every other client on the same channel. This behavior is analogous to a web chat room.

The statistics server manages the allocation of unique session IDs and stores persistent game data, such as high scores, for later viewing.

When a player first turns on the sword, they are greeted with a welcome screen, menu options, and settings. When the 'play' menu option is selected, the sword communicates with the statistics server to obtain a unique session ID that will allow the sword and browser to communicate with each other. The sword displays the session ID to the user, connects to the WS server using the session ID, and waits for further instructions from the WebSockets connection.

The player then navigates to http://vegetableassass.in/ using their browser and clicks on the button to start a single player game. The browser prompts the user for the session ID displayed on the sword, as well as a username to identify the user on the high score. The browser then connects to the channel on the WS server corresponding to that session ID. Once the game starts, the browser walks through steps to calibrate the sword, which involves moving the sword up, down, left, and right within the play area. The game then counts down to the start of the game.

As soon as the calibration is finished, the sword begins sending coordinate information to the server using the already established WebSocket connection. This information is generated using the Magwick algorithm, which is a 9-degrees-of-freedom algorithm that ingests 3-axis data from the gyroscope, accelerometer, and magnetometer of the sword's IMU. The algorithm outputs the absolute orientation of the sword, which is then converted into coordinate information relating the sword's orientation with the position of the tip on the playing field.

The sword sends this coordinate information through the WebSocket connection with a frequency of 10Hz. This data is then relayed to the client's browser through the WS server, which depicts the location of the sword, generates and displays the game to the player, keeps track of game score and game strikes, and transmits the final game statistics to the statistics server.

When the game concludes, the web browser sends the final game statistics to the WebSocket server, which forwards the message to the statistics server through WebSocket. This is then saved into a database to be displayed on the game leaderboard. 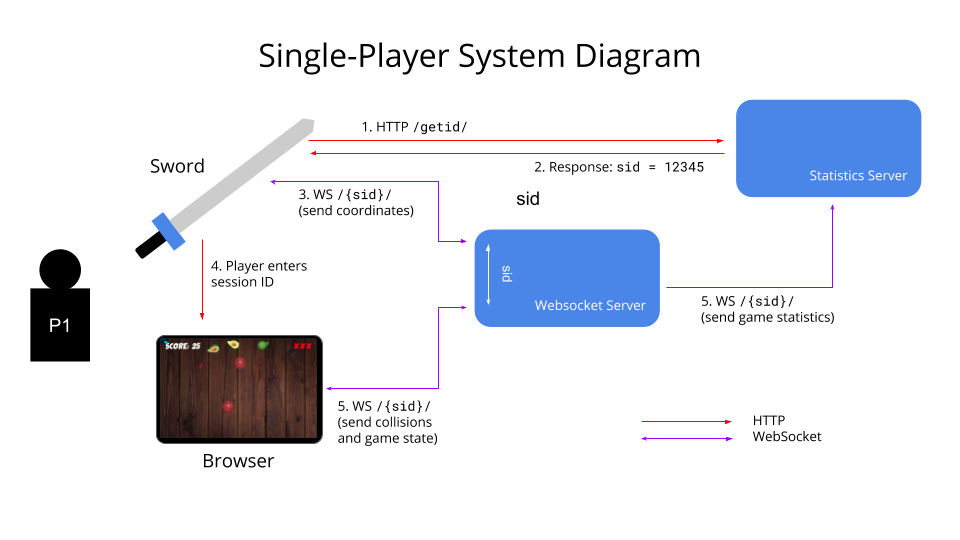 A multiplayer game follows a similar system layout as a single-player game, with a few notable differences. Initially, there are two swords that communicate with the statistics server and obtain unique session IDs. The player then navigates to the multiplayer page on the Vegetable Assassin website, enters both session IDs, and enters a team name.

The web browser will then initiate two concurrent WebSocket connections to the WS server, one per sword. Calibration follows a similar series of steps, but calibration messages are sent to each sword individually: sword 1 is calibrated first, followed by sword 2. Once calibrated, both swords communicate over their respective WebSocket channels. The game is played with two swords on the playing field, one red and one green. Both players work together to maximize their game score while avoiding game hazards. Once the game is over, the browser sends the final game statistics to the WS server, which is forwarded to the statistics server to be stored in a multiplayer statistics database. 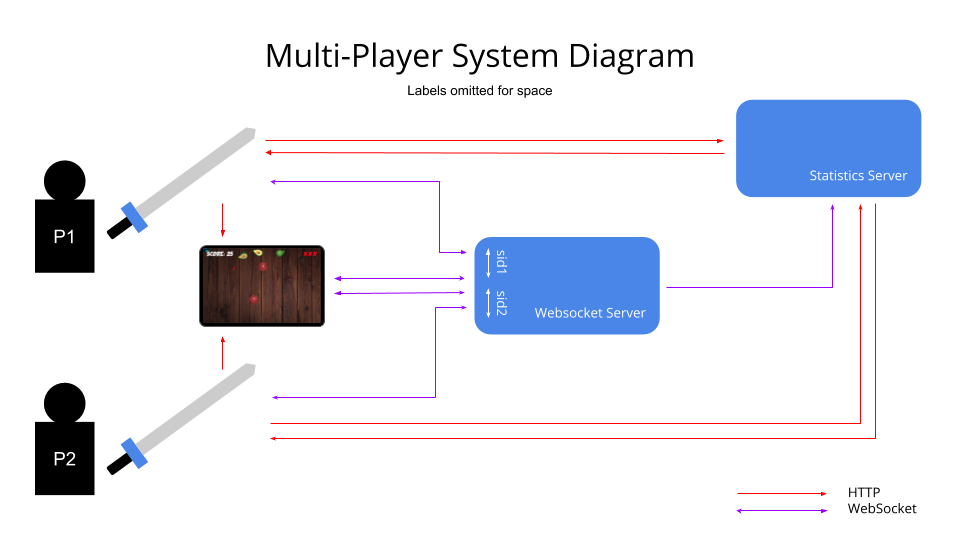 We considered using MQTT, which also leverages a persistent TCP connection (like WebSocket) but has lower overhead and has better support with the ESP32 micro-controller, but we decided to implement WebSocket, because communication between the browser client and the server must be implemented through WS to maximize browser support and minimize additional complexity (such as transmitting MQTT from sword to server and WS from server to browser client). We considered the additional overhead by WS to be dwarfed by the large send rate required for Vegetable Assassin, and try to minimize overhead in other ways, such as through purposefully not securing WS connections using TLS.

In this section, we describe the different system components that make Vegetable Assassin work, how they are designed, and how each component communicates with the others.

The sword is a Nerf foam sword that has an attached micro-controller used to track the sword, communicate orientation data, and display information to the player. These are the components that make up the sword:

The ESP32 micro-controller uses built-in Wi-Fi capabilities to communicate with the other components using HTTP requests and WebSocket connections. The TFT display allows the user to view game connection data, sword status, and change settings. Motion tracking of the sword is enabled by the MPU-9255, which communicates gyroscope, accelerometer, and magnetometer data with the ESP32. When the sword hits a fruit or vegetable in the game, the vibration motor provides haptic feedback to the user (which can be disabled in the settings). The battery allows for truly-wireless usage of the sword, giving the player freedom to move around with the sword.

The browser is integral to displaying the game, processing inputs, and implementing game flow and logic. The browser code is written in a combination of HTML, CSS, and JavaScript, with the majority of computation occurring in JavaScript.

Using a template provided by HTML5Up, the website http://vegetableassass.in/ contains information regarding how to play the game and buttons that direct the player to the actual game.

Upon starting a single- or multi-player game, the user is brought to a page that requests the session ID of the sword(s) along with a username or team name to identify them on the leaderboard. This form sends a GET request (yes a GET request) to the actual game file, which retrieves the query parameters from the URL and processes them in JavaScript.

The game consists of multiple JavaScript files that perform different tasks. They are all located in the /assets/js/vegetableassassin3d/ directory.

Read more about the WebSocket server in the README.

The statistics server is responsible for allocating unique session IDs for WebSocket communications as well as store high score data for player viewing.

The statistics server is built on Django Channels, originally because of the support for WebSockets, but our team determined that Django Channels was not capable of the high-performance and concurrency required by our implementation of Vegetable Assassin.

Read more about the Statistics server in the README.

Communications between the components occurs through two different application-level protocols: HTTP and WebSockets. Both protocols use TCP as the underlying transport layer, but HTTP is used for stateless operations with no latency concerns, while WebSockets is used for stateful communication between the sword, server, and browser that requires low-latency for the best user experience. We explain how each protocol is used in Vegetable Assassin in the following sections.

There are five different HTTP endpoints:

WebSocket connections are initiated using the WS server at ws://game.vegetableassass.in/{sid} where {sid} is the session ID of the WS channel.

Messages are mostly in JSON format to facilitate easy parsing by the server and browser, but two types of messages are in plaintext for implementation ease by the micro-controller.

The files in this directory are static files to be served from a web server. The microcontroller folder contains information about the installation steps required to use the ESP32 code for Vegetable Assassin. The server folder contains instructions on installing both the WS server and the statistics server.